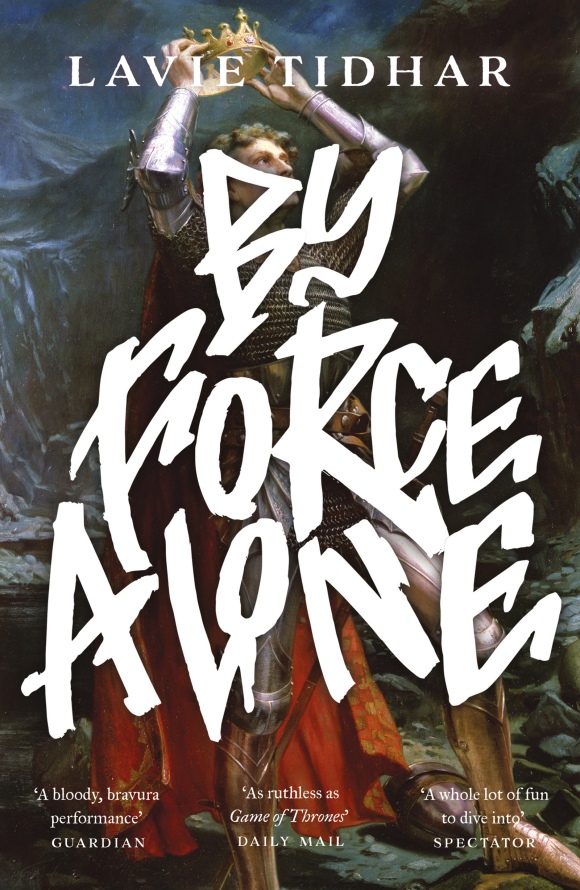 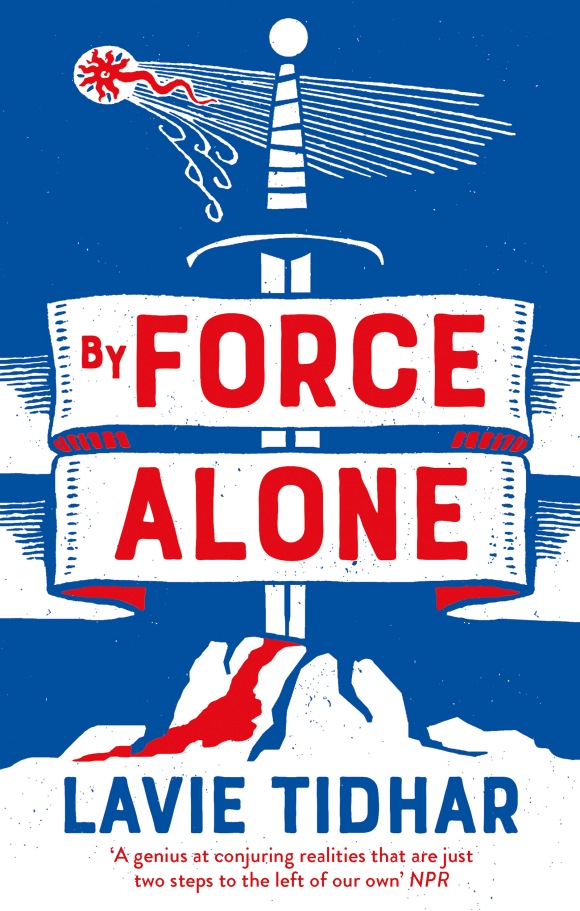 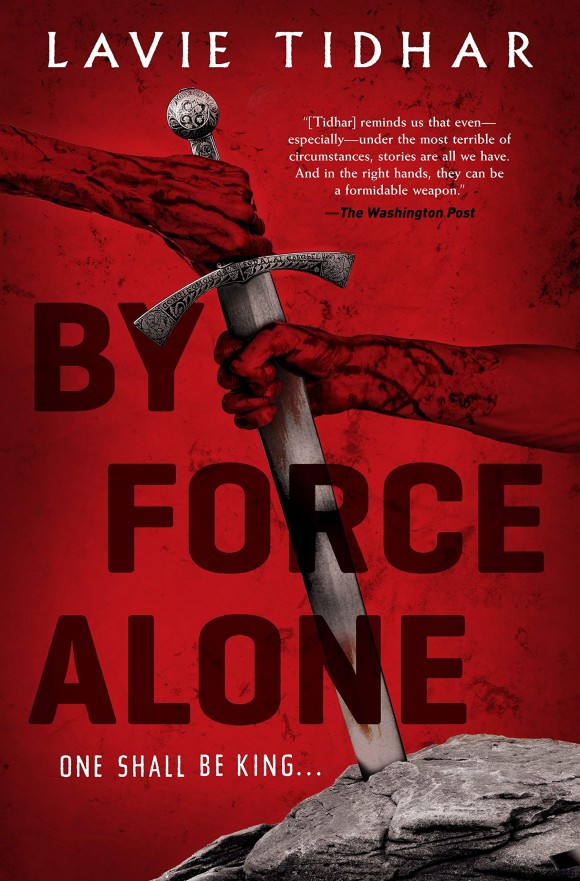 The Romans have gone. While their libraries smoulder, roads decay and cities crumble, men with swords pick over civilisation’s carcass, slaughtering and being slaughtered in turn.

This is the story of just such a man. Like the others, he had a sword. He used it, he slew until slain. Unlike the others, we remember him as King Arthur.

This is the story of a land neither green nor pleasant. An eldritch isle of deep forest and dark fell haunted by swaithes and tod-lowries, Robin-Goodfellows and Jenny Greenteeths, boggarts and predators of rarer appetite yet.

This is the story of a legend forged from a pack of self-serving, turd-gilding, weasel-worded lies told to justify foul deeds and ill-gotten gains.

This is the story — viscerally entertaining, ominously subversive and poetically profane — of a Dark Age myth that shaped a nation.

“Drawing on everything from wushu movies to The Wire by way of Tarkovsky and Tarantino, By Force Alone is wild, surprising and entertaining, and a hugely immersive read.” – M.R. Carey, author of The Girl with All the Gifts and The Unwritten

“Tidhar turns King Arthur’s court into a gangster’s paradise, full of wheelings and dealings, and true grit. If the tale didn’t go down like this, it should have.” – Silvia Moreno-García, author of Gods of Jade and Shadow and Mexican Gothic

“Lavie Tidhar is a fearless madman. The last thing I wanted was another take on Camelot, but it turns out that what I absolutely needed was this profane, hilarious, brutal, genre-mashing story of Arthur as a rising goodfella, his thug knights, a Guinevere straight out of Kill Bill, and a Judean kung fu Lancelot. I haven’t even mentioned the UFOs. There’s no way this should work, but it kills as both sheer entertainment and canny political statement . To my fellow writers: the Arthurian Revision category is now closed. Take your ball and go home.” – Daryl Gregory, author of We Are All Completely Fine and Spoonbenders

“Lavie Tidhar has crafted a punk epic on the mouldering bones of legend and jolted it to life with ten thousand volts of knowing wit and fury.  By Force Alone eviscerates the complacent posturing of the Arthurian myth, explodes the well-worn conventions of the tale and from the shiny jagged pieces assembles a wholly fresh rollercoaster ride of cheap violence, vicious magic and messy human truth. Just read it.  You’ll never look at a wizard the same way again.” – Richard Morgan, author of Altered Carbon and A Land Fit for Heroes

“Lavie Tidhar has created something wonderful, an extraordinary blend of history, legend, and sheer, lunatic inspiration. I loved it.” – Christopher Farnsworth, author of The Eternal World and Killfile

“A beautifully written and thrilling tale, soaked in gore and evocative historical detail, peppered with subtle humour. Tidhar storms the castle of Grimdark, sword dripping with blood, and makes a claim for its crown.” – Angus Watson, author of Age of Iron and You Die When You Die.

“Utterly bonkers, utterly brilliant – a brutal, witty & slightly insane deconstruction of the Arthurian legend by way of Goodfellas, this is absolute bloody (and sweary) joy on the page.” – Russel D. McLean, author of The Good Son and Ed’s Dead.

“By Force Alone is a comet that blazes a brilliant new path through dusty old territory. Bold and inventive, it smashes Arthurian myth to bits, sweeps up the brightest, weirdest, most enchanting pieces, and reshapes them into a wildly original tale.” – Lisa L. Hannett, author of Bluegrass Symphony and Lament for the Afterlife

“A twisted Arthur retelling mixing the historical and the magical with a very modern eye. Brutal and vicious and funny, a Peaky Blinders of the Round Table.” – Adrian Tchaikovsky, author of Children of Time

“I have never come across a more despicable bunch of characters – this is surely an indictment of Lavie Tidhar’s warped and degenerate brain. Without a doubt this is the best Arthurian tale ever written. It has ruined the entire mythology for me.” – Saad Z. Hossain, author of Escape from Baghdad! and Djinn City

“A strong contender for the best Arthurian fantasy yet” – Samit Basu, author of Chosen Spirits and writer-director of House Arrest

“A bloody, bravura performance” – The Guardian

“Extraordinary and vivid… As eclectic as The Sword In The Stone and as ruthless as A Game Of Thrones, this retelling of the whole Arthurian Legend stands alongside the very best.” – The Daily Mail

“The new novel from Lavie Tidhar, who delights in subverting literary and pulp-fiction stereotypes, tilts at Arthurian legend… The intent is as much ironic as iconoclastic. At a time when many in a fractious, divided Britain are looking to the past for comfort, Tidhar seeks to remind us – in dizzying, profane fashion – that our nation was, like so many others, built on nothing more romantic than bloodshed and conquest.” – The Financial Times

“Tidhar retools and retells both history and legend in a complex, profane and fascinating tale of blood, mud, magic, kung fu and mafia hierarchies. The result is stunningly unique and the way he threads his daring if not sacrilegious additions into the fabric of the Camelot tale is like a punch in the gut… Uproarious, provocative and utterly gripping.” – Maxim Jakubowski, Crime Time

“[A] violent, funny, and at times almost absurd, epic… Tidhar remains an utterly original voice. This twisted, brutal, gory deconstruction of history and myth brings new raucous blood into the moribund tales of Camelot… There certainly will not be a better fantasy story published this year!” – Crime Review

“By Force Alone is a jolt of pure entertainment, a brilliant, revisionist blend of magic, crime syndicates and Kung-fu knights.” – Locus

“A bloody, bawdy gangster story… Shock value and gross-out humor are as much a part of the novel as political commentary… an utter rejection of comfort and nostalgia… A power fantasy that pushes both words to their limits.” – Den of Geek

“Post-truth fantasy [that is] serious fun… a novel that demands your attention… steal[s] the power of the oldest tales. 4.5*” – SFX

“Proves the Matter of Britain still matters with this stylishly gritty, gripping reimagining of Arthurian legend… Tarantino meets Monty Python in this wry, blood-soaked tour of legends that thumbs its nose at purism. Scripted by eldritch puppet masters, Arthur’s reign has little glory and often props itself up with the same nationalism and xenophobia his legend has been used to invoke in real life. A mythology for a new generation, Tidhar’s irreverent revisioning replaces dramatic heroism with acerbity and absurdity.” – Shelf Awareness (starred review)

“Tidhar saturates this epic adventure with profanity, dark humor, sword-sharp twists, and unexpected moments of pathos. Readers who hold King Arthur dear to their hearts will be gratified by Tidhar’s attention to detail amidst the innovation. This dark, imaginative take on a classic is sure to impress.” – Publishers Weekly

“Tidhar uses fantasy and science fiction tropes to create fascinating, twisted new versions of these iconic stories. But he also uses these tales, as they have often been used, not just for entertainment but for a political purpose, and to explore universal eternal human attributes… It is this combination of setting, storytelling and theme that shows once again why Lavie Tidhar is one of the most interesting speculative fiction writers around.” – The Newtown Review of Books

“A refreshingly honest and brutal look at human nature and power [with] some truly staggering writing.” – Starburst

“By Force Alone is a joyous rush of a novel, sweeping up everything from grimdark to gangster films to kung fu to Russian science fiction in its wake, and somehow pulling them together into a coherent whole that critiques Britain’s toxic self-image and the lineage of the Fantasy genre itself.” – The Fantasy Hive

“everything I hoped it would be and more… By Force Alone is the rowdy bastard child of John Boorman’s Excalibur and Trainspotting.” – The Eloquent Page

“Incredibly moving… a work of wonderous imagination and extraordinary skill.” – Dancing on Glass

“Lavie Tidhar has subverted history and legend alike to brew up something potent, gritty, vulgar and brutal… If you come to the book expecting something classically Arthurian or pleasantly Tolkienesque, then you’ll be in for a shock.” – SFCrowsNest

“A magnificent novel, hilarious in some moments, critical and acid in others, that already It is one of my favorites of the year.” – Calles de Tinta

“In Tidhar’s hands the latest rewrite of The Matter of Britain hits all the right notes and as ever with this writer, the breadth of cultural references is impressive… the ending of By Force Alone is a devastating assassination of any cosy, nation-building mythicness that one might look for in the Arthurian cycle. Not only has Tidhar exploded the internal content of the cycle, substituting amorality and power lust for the chilly literary chivalry of the late Middle Ages but he’s shown how that cycle will be appropriated by the victors from the losers… Another complicated, thought provoking and many-layered novel from Tidhar whose books are definitely a must-read for me, taking in a dazzling range of themes and perspectives.” – Blue Book Balloon