Was very surprised – and pleased! – last night to find out I won the BSFA Award for Best Non-Fiction, for my work on the World SF Blog.

The blog’s fiction editor, Sarah Newton, was on hand at the awards ceremony to accept on my behalf. I wrote a short speech:

I have seen a lot of changes in genre fiction in the past four years, a greater awareness to do with representation, and a strong and vigorous discussion of assumptions only a few years ago no one thought to question.

I am delighted I’ve been able to contribute to that discussion, in whatever minor capacity, and very grateful to the members of this convention for recognising us in this way.

And here’s Sarah with the award! Which I will hopefully be picking up in person later this week. 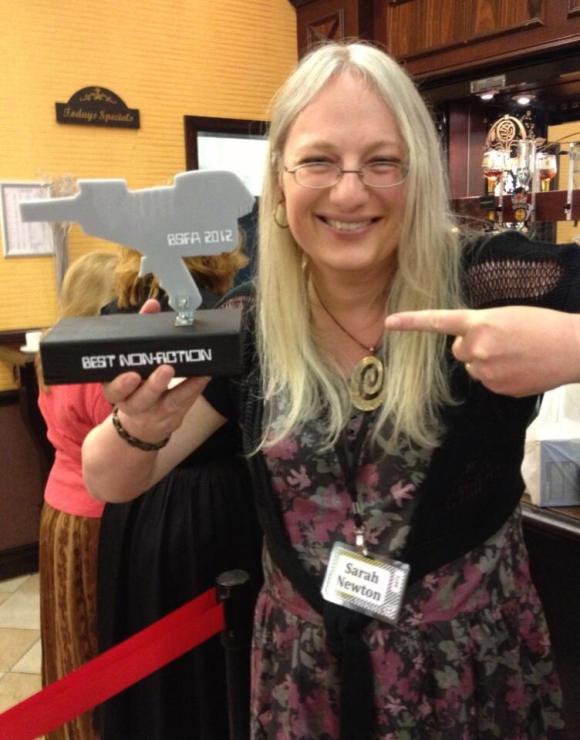 News this morning that I’m nominated for the BSFA Award in the non-fiction category, for the World SF Blog.

My name may be on it but the blog wouldn’t exist without the help of several people, chief amongst them Charles Tan, our current fiction editor Sarah Newton and former fiction editor Debbie Moorhouse, and our rag-tag team of contributors. Next month marks four years of the blog, so its a particular pleasure that it is recognised today.

I’m delighted to say that Camera Obscura is nominated for the Sidewise Award for alternate history, in the long-form category.

I have to admit, the Sidewise is one of my favourite awards, as I love alternative histories – I never expected to be nominated for it though! This is the second award nomination for Camera Obscura, following the Airship Award nomination last year. And, interestingly, my fifth award nomination this year (following the Kitschies, BSFA, BFS and Campbell nominations). A bit of naches, to use the Yiddish term… 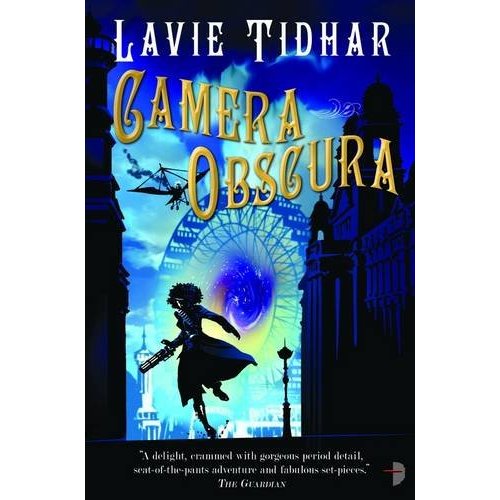 We are pleased to announce this year’s nominees for the Sidewise Award
for Alternate History. The winners will be announced at Chicon 7,
this year’s Worldcon, in Chicago, Illinois during the weekend of
August 30. The Sidewise Awards have been presented annually since
1995 to recognize excellence in alternate historical fiction. This
year’s panel of judges was made up of Stephen Baxter, Evelyn Leeper,
Jim Rittenhouse, Stu Shiffman, Kurt Sidaway, and Steven H Silver.

Congratulations and best of luck.

The Sidewise Awards for Alternate History were conceived in late 1995
to honor the best allohistorical genre publications of the year. The
first awards were announced in summer 1996 and honored works from
1995. The award takes its name from Murray Leinster’s 1934 short story
“Sidewise in Time,” in which a strange storm causes portions of Earth
to swap places with their analogs from other timelines.

For more information, contact Steven H Silver at shsilver@sfsite.com
or go to http://www.uchronia.net/sidewise.

Surprised and delighted to find out this morning that Osama has been nominated for Best Novel in the British Science Fiction Association (BSFA) Awards. Even more delighted that Pedro Marques’s amazing cover of Osama is also nominated!

Just look at that cover!

The Islanders by Christopher Priest (Gollancz)

Covehithe by China Mieville (The Guardian)

Out of This World: Science Fiction but not as we Know it by Mike Ashley (British Library)

Very glad to say Osama has been nominated for the Kitschies Award for Best Novel, established to celebrate “the year’s most progressive, intelligent and entertaining works of genre literature.”

There’s a nice write-up in the Guardian, too.

The winners will be announced on February 3 at the SFX Weekender convention held in Prestatyn, north Wales.

Very glad to report that Camera Obscura has been nominated for the Airship Award in the written category! The Airship Awards are given for a variety of steampunk categories at Steamcon, an annual steampunk convention.

The nominees in the written category are:

Very nice company to be in! A full list of nominees can be found here.