Comics Heroes have recently reviewed Going To The Moon, giving it five stars:

A tender, touching, merciless and heartbreaking book that does an awful lot to your emotions over its 38 exquisitely-rendered pages … it’s not just something to be admired by grown-up comics fans; it’s something that should be given to kids and those touched by Tourette’s, and held tight for its wisdom and clear-headed sentiment … Paul McCaffrey’s art is beyond superlatives; he meshes seamlessly with Tidhar’s words to remind us all what it is to be young and powerless and at the mercy of others, but that at the end, there’s always hope. A triumph.

Copies can be ordered directly from the publisher. 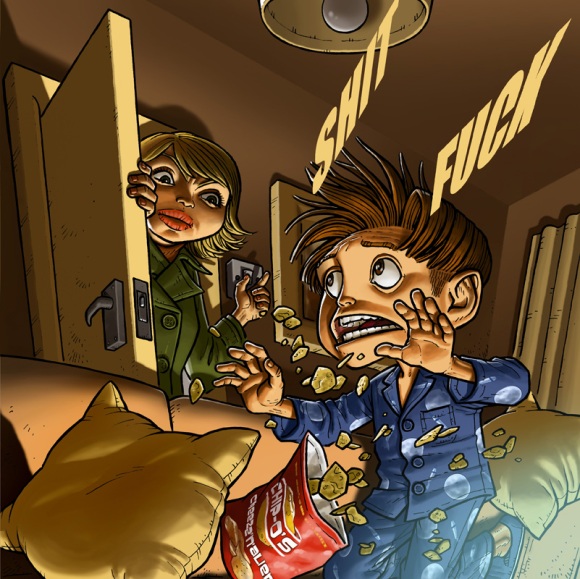 Comic Buzz reviews my picture book about a boy with Tourette’s Syndrome, Going To The Moon:

I’m glad I got one though, because by page one I was hooked. We meet Jimmy as he prepares to walk through the school gates, and the text tells us “Jimmy goes to the fucking school”. And there we have it; the clash between the innocent image of the schoolboy in his pristine uniform, bag on back, and the reality of the terrible disorder Jimmy suffers from.

We learn about how the condition affects Jimmy. He has ticks that make his face and arms move outside of his control. He also uses bad words and has no way of stopping himself from swearing even when he doesn’t want to. Apart from his Tourette’s though, he is just like the other kids. Perhaps that is what really helps to deliver the message in this book; he is just a boy. Jimmy has a dream. He wants to be an astronaut and land on the moon. Just like countless other boys his age.

The story follows Jimmy from his dream to the reality he has to face everyday: bullying because of his Tourette’s. The other kids just don’t understand why Jimmy says the things he says. His words are not intended to hurt but theirs are, and they do. But this does not dissuade Jimmy from his dream and the reader can only admire him for that as he continues with school and deals with his bullying as best he can.

Going to the Moon is alive with themes, and even for people who have no real world experience with Tourette’s syndrome there are elements of loneliness, unjustness, suffering and sadness in here that everyone can relate to. Bullying, friendship, growing up, family life, ambition, and restriction by circumstance are all things that affect Jimmy as the story progresses, and by the end I found myself very connected to the hero and thus moved by the tale. 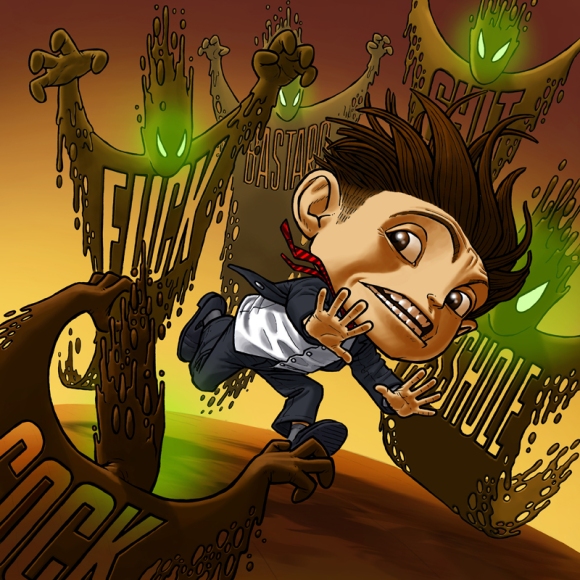 McCaffrey’s artwork is arresting throughout this story. Facial expressions and body poses have been used to full advantage to contort Jimmy and depict visually just how little control he has over himself and how unnatural he can appear to the ignorant. Aside from that the full-page illustrations are beautifully coloured and stylised perfectly to reflect the prose. Indeed the prose itself has been displayed in a very visual manner with the use of font, emphasis and colour really helping to drive home just how much Jimmy is restricted and hindered in life by his condition.

In a similar vein, Tidhar’s words are just as important here in helping the reader to understand Tourette’s syndrome, and thus to understand Jimmy and empathise with his situation. There are some fantastic lines in this novel, which I would just be spoiling to quote them here without their visual counterpart. The essence of this book is that the words are in the art and the art is in the words; together they are more powerful than any other method I have seen before to both educate a reader and provoke an emotional response at the same time.

I highly recommend Going to the Moon, as I think there is something in here that every reader will take away with them.

Going To The Moon has been reviewed over at SF Signal:

Going to the Moon is the story of a young boy named Jimmy who wants to be an astronaut. He wants to go to the Moon. Jimmy also doesn’t want to have to fight his constant, taxing struggle against the Tourette’s syndrome that dominates his life. He doesn’t like the dance-like involuntary movements it causes in him. He’s bullied, in the way young people who are different are often bullied. The corprolaia of Toruette’s syndrome means that he involuntarily uses curse words, even though he doesn’t want to. As such, the book doesn’t shy away from trangressive words. Words I can’t use in this review.

The real heart and soul of the book is found in the pictures by Paul McCaffrey. They are beautifully and colorfully drawn. But there’s more to the book than just Lavie’s words and the pictures. Like the best picture books, the text and the images engage and interpolate with each other, in a dialogue that makes the book stronger for that interaction. The theme of aliens (and Jimmy himself is definitely an alien in some ways) is reflected in the imagery much more than the text. To cite another example, the use of curse words in exclamation in the imagery reminds me of the innovative subtitles in the movie Night Watch.

And the end brought tears to my eyes as the reader figures out what Jimmy and the friend he makes are too young to realize. Curse you, Lavie Tidhar…your audacity strikes me again.

It’s not a book you’d want to read to your children, because of the language. Although its about a young boy and his concerns, its a book for adults. And it moved me. It will move you, too. – read the full review.

And I am interviewed at SF Signal about the process of creating the book:

CT: How did you end up collaborating with Paul McCaffery? When you were writing the book, did you know he would be illustrating it?

LT: Terry put us together. It took a long time to find the right artist, if I remember rightly. But once the connection was made, it was obvious he was the perfect person for it. I love his artwork, and he gives the book this wonderful slightly-off sense – it’s innocent, and charming, and really emotive, I think, and that weird physical perspective of the characters really works. I guess I’m just a fan!

LT: To begin with, I had to do sort of word-sketches for each page of illustration. I had to take the original text and really clarify how it was meant to be split into pages, and opposite each page of text I had to write down notes for Paul, on how I envision the page to be, what should be in it and so on. So in a way it was a little like writing comics, only you’re not writing panels, you’re writing full page illustrations. Then Paul went away and then the pages would start coming in, and then, in a few cases, we’d have back and forth on them, what worked and what didn’t. So sometimes the first illustration was spot on, at other times we went through several tries to get to the one we were most happy with.

CT: What was the most difficult aspect about writing the book?

LT: The whole thing was a challenge – in the best possible way! I think the hardest thing though was having patience – we all knew this was a long-term project, it’s literally taken years from conception to actualization – I think I’m actually still in a bit of shock that it’s real and physical and in my hands. – read the full interview.