Before I fly to the World Fantasy Convention – for the presentation, on Sunday, of the World Fantasy Award, for which Osama is nominated for Best Novel – I leave you with this classic Israeli nazisploitation (‘Stalag’) cover: The Monster’s Stalag, by “Kim Rockman.” No need to thank me! 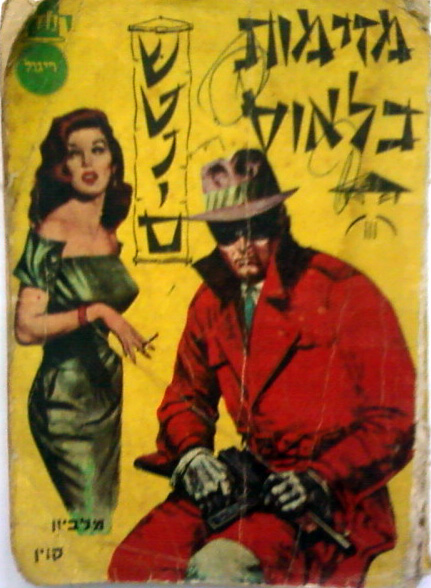 The Bridge on the Kakadon(?) River (front cover)

The Bridge on the Kakadon River (back cover)

He was the man with a thousand names. We best knew him as Amos Carmeli, under which name he wrote some of his most successful series, including The Young Detectives, The Young Sportsmen and The Sailors; under the name On Sarig he created Dani Din: The Invisible Boy, one of the most iconic figures of Israeli children’s fiction. 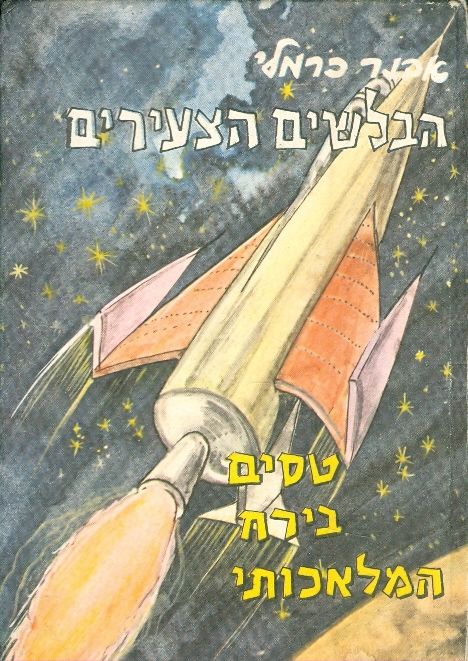 The Young Detectives Fly in the Artificial Moon (1958)

Dani Din became invisible after taking a purple potion created by Professor Katros; he spent the rest of him time fighting the various enemies of the State of Israel, including various Arab states, Saddam Hussein and – naturally – aliens.

The Sailors were a militant group of freedom fighters fighting the British under colonial rule in Palestine; the series ended on something of a cliff-hanger after a botched assassination attempt on Adolf Hitler. The Young Detectives, memorably, flew into space (The Young Detectives Fly in the Artificial Moon), found the Queen of Sheba’s diamond and – of course – met Tarzan.

Gafni was prolific, and his career spun decades. His works were deeply nationalistic, and the figure of the Arab was a handy and persistent enemy for his (mostly) child heroes. He incorporated significant elements of science fiction and fantasy into his pulp narratives.

Etgar Keret affectionately parodied him in the short story “Gadi Din in Counter Espionage Adventures”, from his collection Missing Kissinger, written from the perspective of Dani Din’s son, and describing how Din pere is abandoned by the political and military establishment, later dying of liver damage caused by the mysterious purple potion. It is a memorable swan song to an entire era of Israeli children’s fiction.

My own Nights of Scorpion and Mystery (Hebrew Only) is ironic homage incorporating many of Ganfi’s various characters; in a more critical mode, The Master (published 2007 in Strange Horizons) is a longer, sober examination of a Gafni-like character in his twilight years, examining both his politics and influence and “replicating” a page in his style, in the fictional adventure The Young Riders Against The Master Of Terror:

“You can’t shoot me!” Arafat laughed, a demonic laughter that echoed like thunder in the dusty air of the ancient tomb. His dark beard shook with his evil laughter, and his eyes narrowed like two thin blades. “I have sold my soul to the great Djinn and no-one and nothing can stop me now! I am invincible—and I am not afraid of a little boy who is past his bed-time!”

“You killed my friend!” shouted Uzi, remembering the dismembered corpse of Rani Rimon as it swung, horribly mutilated, at the end of a rope, naked and wrapped in the blue-and-white flag of his country. Rani had saved Uzi’s life more times than he could remember: but the one time Rani needed him, Uzi was not there. Hot tears of shame strangled his throat now, and only one thought was on his mind: revenge.

In “The Master” the writer – here named Shaul Canaan (Gafni was a Canaanite, a member of a somewhat radical group of writers and artists in his early days) – is invited to attend a science fiction convention in Tel Aviv. It ends:

On his way back the shadows gathered in the corners of the streets, taking on the shape of secretive, misshapen kids. It had been a strange, disagreeable day; he was overwhelmed by his reception, by the size of the audience waiting for him in the chilly, air-conditioned auditorium. Ido had helped him onto the stage, where he sat alone, beside a wooden table with a bottle of water and a single glass sitting alone on its surface. He was handed a heavy microphone to speak into, and Ido took a seat beside him, both of them facing the crowd, which looked up to him, young faces curious in a bored, knowing kind of way that made him feel even more exposed, more lost for words than he had ever been in his life. He resented them then, and hated himself for feeling that way: they were, after all, the audience he had written the books for, the children for whom the new Young Riders were created. But he had never been able to relate to the young when they stopped being young, when life scarred them, when the books could no longer act as an anchor for them and they abandoned words for deeds, translated his harmless fantasies into action from which there was no turning back.

“We have with us today,” Ido had said, and his words returned from the two speakers on the two sides of the stage, amplified and echoed, “the famous children’s writer Shaul Canaan, author of the . . .”

He droned on, reciting Shaul’s many novels, moving on to a lengthy biographical description, and Shaul thought suddenly of Na’ama, and the feeling of loss intensified inside him, shifting on the inside of his stomach like an ulcer. Na’ama, he thought, where are you?

But she wasn’t there; of course she wasn’t. And that evening as he walked home under the lengthening shadows he missed her; missed her with a force that used no words, that had no narrative and no shape, and he knew then that he would not write again. He walked away from the children, while old, unwashed tears made a nest in his throat; and as he stepped down the wide street it seemed to him, momentarily, that he was no longer alone: that his creations had gathered about him like an honour guard, Lotem, and Shimi the Moroccan, and Skinny Moshe, and Daphna, and Danny the Knife, and their faces were no longer the innocent, beauteous faces of Sabras, drawn those many years ago by M. Aryeh. Now they were old and haggard too, like himself, scarred by the wars, by the occupation, by the changing of the world. They looked at him sombrely, and their eyes were empty and haunted, like the broken windows set in a long-deserted house which had fallen to disrepair; but Shaul just passed his hand over his eyes, warily, and when he had opened them the spectres had vanished, and he walked the rest of the way home in solitude.

I can say this of Gafni: he was a hack; his books were politically dubious, hastily written and lacked any pretence at literature; and yet, for all that, they have given this writer – and countless other children beside – untold hours of enjoyment. And that is a rare thing indeed.

I’m working on what I hope will be my final Osama story – following My Travels with Al-Qaeda, Wrong Number and, of course, the forthcoming Osama.

It’s a story collaboration with “Mike Longshott”, the pulp paperback writer Joe is hired to find in Osama, as well as featuring him as the hero of a pulp story about a special sort of bounty-hunter. At the same time, like in Osama, it has its metafictional element, a second layer of narrative written by “Lavie Tidhar”. I have no idea yet where it will be published, but here is a short extract from the “me” sections, explaining where “Mike Longshott” originally came from.

I plucked “Mike Longshott” out of the moulding Hebrew pulp novels of the sixties and seventies. He was a composite being, a man who did not really exist. Longshott wrote soft core pornography, tales of Nazi concentration camps where prisoners were abused, physically and sexually, by Aryan goddesses, sadistic nymphomaniacs of the Third Reich.

He was a pen-name broke young writers hid behind for cash. He was a collective, burrowing into the sexual and social taboos of his era. He wrote crap, was paid crap, and his books, sold under the counter, went from hand to hand and bathroom to bathroom, their covers featuring naked flesh and whips, guard posts and POW slaves and a plethora of large improbable breasts. He never lived, he never breathed, his prose was eminently forgettable. He was a hack, a pulpster, a paperback writer. His name was Mike Longshott and he was going to be my hero.